Top Advertisers in Breakfast by Spend

After tallying the top spenders in Breakfast from AirCheck Ad Revenue estimates, the Victorian Government took out the top spot with their ‘Stay Safe, Stay Open’ campaign. Approximately $446,000 was spent placing a mix of 15 and 30 second spots across 48 stations in 10 markets nationwide. The most commercials in this push were placed on Nova and Smooth in Melbourne, with 72 and 61 spots respectively between 6am and 9am.

Although they placed the most commercials in this time, Harvey Norman had the second highest AirCheck Ad Revenue estimate. This was due to placing more ads with shorter durations of 10 and 15 seconds, as well as having the most advertisements on stations in Newcastle, Wollongong, Central Coast, Gold Coast and Geelong. Over 2,300 Harvey Norman spots were heard across 55 stations, meanwhile Domayne was fifth on the list, with an Ad Revenue estimate of $202,183 from 1,109 spots airing on 35 stations.

According to AirCheck Ad Revenue, Chemist Warehouse was the third biggest spender in Breakfast, with an estimated spend of $258,686. The majority of the spots were placed across Nine Radio stations, with the most on 2GB Sydney, then 6PR Perth and 4BC Brisbane. 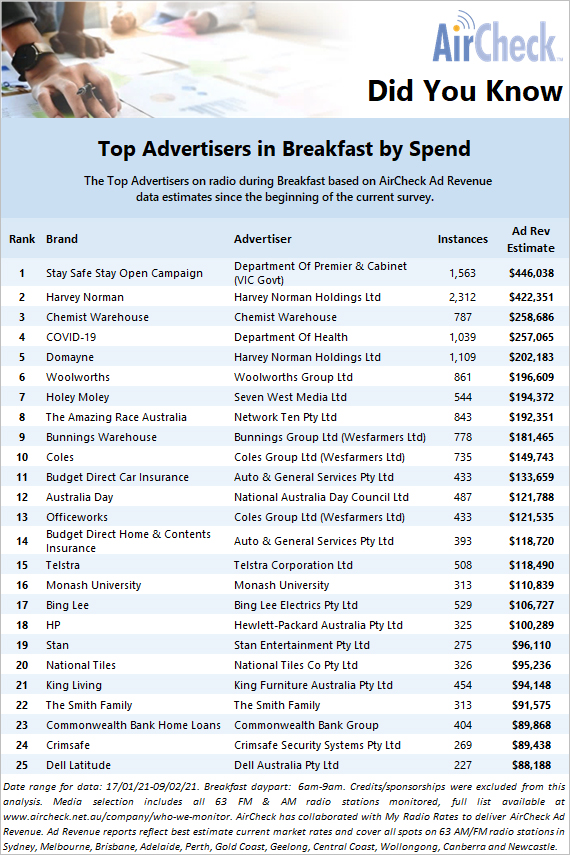